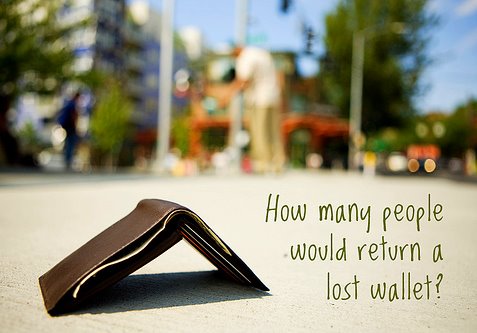 Here is a letter regarding a kiddush Hashem that was performed by a talmid of a yeshiva where I am a rebbi, and the effect it had on a secular Jew. It was so special, I felt it should be shared by as many as possible.

[The letter is presented as it was received, without any editing.]

I am writing to you because of how inspired I am by one of your students, Ethan Yousifzaideh.

At around 4pm today I was in West La College to watch my son’s Track and Field team and YULA was also competing in it. At around 6pm I got home and realized that my wallet was lost and I knew that It must have fallen out while I was still on the field. Terrified, I did not expect to ever get it back again and I had around $350 in it. In addition I had my credit cards, Id, gift cards and a lot more items with sentimental value. I knew that there were over 200 students and parents alike and did not expect any body would return this. The truth is I am not sure if my children or even I would ever return something with such great value. However, I was wrong.

At around 7pm I heard a knock on my door with a Jewish kid wearing a Yamaka and having his strings. He had followed the address on my driver license and personally delivered it to me all the way to woodland hills. I gave him a hug and asked him what made him do such a kind thing that anybody else I knew wouldn’t and he told me that “this is the moral thing to do”. He explained that he’s Jewish and has been attending a Jewish private school since pre-school and has been taught to do what is morally right including returning lost items.

Shocked, I became quiet for a few second thinking of how I could repay him and finally decided to take out my credit cards and I’ds and hand all the $347 cash to him as a way to reward him. But he did not accept it no matter how many times I offered. This only made me appreciate him more. We then spoke for about 10-15 more minutes and he told me about his school YULA and more about Judaism. After he left I couldn’t just forget about what happened and felt a need to repay him for doing this. I have therefore decided to donate all the $348 to the Student Council Fund that he was describing when we spoke.

I am emailing you to thank you for mentoring your students so positively. I myself am a non-religious Jew, and have secluded myself from the Jewish community. However, I am not able to turn a blind eye to something so inspiring. If this is what Jews do then I want my kids to be like your students. Inspired, I have promised myself to put more effort to learn more about my religion and finally become proud to be a Jew.

I am working to get this story into the newspapers and will be contacting the LA Times shortly because I want the whole city to know about this act of kindness and mention your school. He is a great rolemodel and though he might be humble he still deserves great recognition.