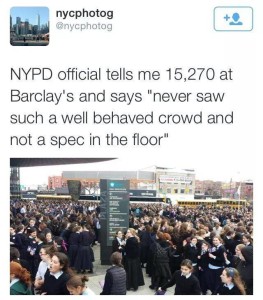 Brookyln, NY– Over 15,000  Bais Yaakov girls, mothers and grandmothers gathered together to observe the 80th yahrtzeit of Sara Schenirer. The NYC photographer who captured this photo, managed to have a conversation with a NYPD official. Throughout all the events the official has encountered he said he, “never saw such a well behaved crowd and not a spec in the floor”. The event was held at the Barclays Center on March 17, 2015.

Sarah Schenirer was born in Krakow, Poland on July 15, 1883 to Bezalel Schenirer (born in Tarnów) and Chaya Lack.[1] In her memoirs, she describes herself as the unassuming and withdrawn daughter of Hasidicparents. She attended school until the age of thirteen, but could not continue because her family was poor. She became a seamstress.[2] When one client was unusually particular about the measurements of her dress, Schenirer wrote in her diary: “People are such perfectionists when it comes to clothing their bodies. Are they so particular when they address themselves to the needs of their soul?” [3]

After the outbreak of World War I in 1914 she moved to Vienna, but returned to Kraków early the next year, where she organized a group of girls and taught them Jewish studies.[2] She succeeded in overcoming initial resistance against this new type of school and saw rapid development of about 300 schools in pre Holocaust Europe. Her initiative was approved by the leading rabbis of the times, such as the Gerrer Rebbe, RabbiAvraham Mordechai Alter and Rabbi Yisrael Meir Kagan (known as “the Chofetz Chaim”).

In 1923 Schenirer set up a teachers’ seminary to train staff for her rapidly expanding network of schools. The main goal of the schools was “to train Jewish daughters so that they will serve the Lord with all their might and with all their hearts; so that they will fulfill the commandments of the Torah with sincere enthusiasm and will know that they are the children of a people whose existence does not depend upon a territory of its own, as do other nations of the world whose existence is predicated upon a territory and similar racial background.”

Leave a reply Click here to cancel the reply