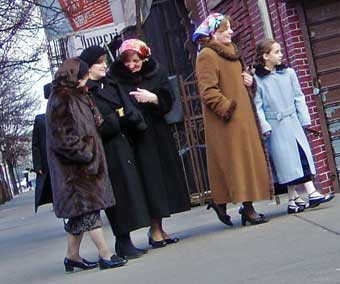 The Satmar chasidim are the Boo Radleys of our town. Like that character in “To Kill A Mockingbird,” they scare the neighbors and frighten the horses. They hide but don’t seek. They’re quaint but not cute. In a narcissistic city, they refuse to flatter. Jewish families visit Williamsburg, Va., but not Williamsburg, Brooklyn. They don’t want visitors and don’t have gift shops.

Yet once when I was in the hospital, a Satmar woman came every morning with hot soup, freshly cooked chicken, homemade applesauce and marble cake. She was shy and of indeterminate age. She didn’t know who I was, just that there was a Jew on the eighth floor.

I didn’t need her food but didn’t say so because I liked seeing her in the mornings. She was from the Ladies Bikur Cholim D’Satmar, a group of women who cook and deliver food to some 70 patients daily in more than two dozen hospitals from Staten Island to Washington Heights. Almost none of the patients served are Satmar.

About 15 “ladies” leave Williamsburg every morning in a van that takes them and their bags full of meals to the hospitals. More often than not they return to Williamsburg by subway, and a long ride it is from most hospitals. The Ladies Bikur Cholim visits six days a week in rain, heat or sleet. The day after 9-11, they crossed the closed bridges by hitching rides in Jewish ambulances.

“This started with the Satmar rebbetzin [the late Feige Teitelbaum],” said one Satmar lady who wouldn’t tell me her name. “She started this after the war, from her own little kitchen. She herself took the soup on the subway. Then she took on a helper, and more helpers.

“It was after the war. Almost everybody [in Williamsburg] was a Holocaust survivor. No one had families. She was like a mother. She heard someone was sick, she made soup. Do you know Satmar?”

I didn’t want to say that I knew Satmar all too well from their battles with other Jewish groups. After all, she was coming to me in gentleness, and I wanted to be gentle in return.

I told her my grandparents had a bungalow on the banks of a Catskills lake. The lake was surrounded by tall pines that reflected in the water. On the far side of the lake was a Satmar colony. At dusk we could see the lights in the windows and hear voices muffled across the water. That summer I often though that as different as the Satmars were, we enjoyed the same godly beauty. They must have loved the lake as I did.

“In the summer we go to the country,” she said.

That was as personal as the conversations got.. The Satmar women avoided personal questions. “We just try to make the patients feel happy,” she said.

In emergency rooms, everything earthly – your keys, shoes, wallet, the computer disk in your shirt pocket – is put into a bag called “Patient’s Belongings.” In the John Lennon exhibit in the Rock & Roll Hall of Fame, the final item was Lennon’s “Patient’s Belongings” bag from Roosevelt Hospital, for in the end, no matter who you are, that’s what it comes down to.

To the Satmar ladies, all the feuds and misunderstandings of this world go into that bag, that bag that no patient needs. So why talk of earthly things, of old fights or affiliations?

After getting out of the hospital, like a Hansel or a Gretel, I followed the crumbs back to 132 Ross St. in Williamsburg, a cellar several steps down from street level where the Ladies Bikur Cholim D’Satmar have their office and kitchen.

Throughout the day, Satmar women from the neighborhood would bring in a big sheet of sponge cake, or a large tub of homemade applesauce made in their private kitchens.

In the Ross Street kitchen, Mrs. W. answered the phones and penciled in the information from individuals who alerted her to a Jewish patient somewhere in a hospital. She had no computer to help her keep track of the many patients. She kept the names of her many volunteers in raggedy cloth-covered loose-leaf.

“We’re here from 8 in the morning to 6 at night,” she said. “Not me, maybe” – she has 12 children, after all – “but someone is here. Other than Shabbos [Sabbath] and yontif [the holy festivals] there’s no such thing as a day off. On a short Friday, do you know what it means to deliver to hospitals and be back to make Shabbos? And these are women with large families.”

Mrs. W. explained, matter of factly, “this is what we do. The whole Satmar community is based on chesed [mercy]. We help people and Hashem [G-d] should help us.”

I said, “I’m sorry I never brought soup to you, if you or someone in Satmar was sick.”

“No one should be sick,” said Mrs. W. “G-d forbid. We should always be able to help each another.”

None of the Satmar women would allow me to know their names or to take their picture, yet we were strangely intimate, these women and I. After all, we Jews are more sweetly intimate than we suppose. There are people in our community whom we barely know, but we can walk into each other’s shivas [houses of mourning] without explanation. If one of us dies, we volunteer to wash each other’s bodies. If sick, we bring soup to Jews we never met before.

We may never speak again, these Satmar women and I, but it was as if we shared the same lake, a piece of G-d’s beauty, the water rippling flowing from one side to the other.