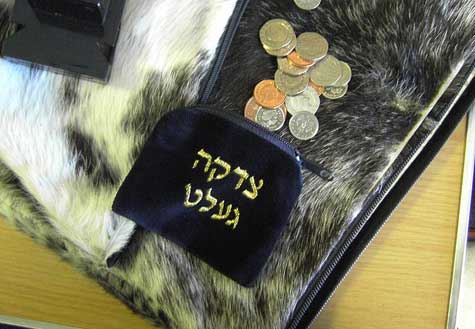 September 9, 2010 • By Tom Jacobs
Giving money to the poor is a doctrine of pretty much every religion, but a new study suggests some faiths are better than others at inspiring their followers to actually open their wallets.
Specifically, Jewish families in the U.S. are more likely than their Christian counterparts to contribute to charities focusing on providing basic necessities.
That’s the conclusion of a study by economist Mark Ottoni-Wilhelm, just published in the Journal for the Scientific Study of Religion. After controlling for various factors that influence giving, such as income, education and family size, he found support for organizations focusing on food and shelter “does not vary across Christian denominations and nonaffiliated families in any notable way.”
“However, Jewish families are both more likely to give, and, when they do give, give larger amounts,” adds Ottoni-Wilhelm, who is in the economics department of Indiana University-Purdue University Indianapolis.
Ottoni-Wilhelm’s findings are based on data from the 2001, 2003 and 2005 waves of the Center on Philanthropy Panel Study, part of the Panel Study on Income Dynamics. Among the questions it posed to participants: “Did you, or anyone in your family, make any donation (in the previous year) to organizations that help people in need of food, shelter or other basic necessities?” A follow-up question asked: If so, how much?
He found 29 percent of American families donate to such organizations in a given year, with an average gift of $490. “This 29 percent is made up of three groups,” he notes. “Thirty percent are occasional givers who gave in only one of the three years observed; 37 percent are families who gave in two of the years; and 33 percent are regular givers who gave in all three years.”
So how does this break down in terms of religion? “Although simple descriptions of giving to basic necessity organizations reveal differences across Christian denominational identities,” he writes, “these differences disappear when other differences in income, wealth, ethnicity, etc. are controlled.”
Once those factors were taken out of the equation, Ottoni-Wilhelm found “[n]o differences between Protestant families and Catholic families. No differences between mainline Protestant families and evangelical Protestant families.”
The only exception was Jewish families, who were, on average, significantly more generous than those of other faiths. Ottoni-Wilhelm argues the reason for this most likely lies in the means of persuasion favored by different religious cultures.
For most Christian denominations, arguments for aiding the needy are generally framed in terms of “stewardship, duty and reciprocity,” he writes, adding there is no evidence that any of those approaches are effective. The appeals to duty provided by pastors “are especially weak, because they do not frame that duty as a part of the member’s religious identity,” he argues.
In contrast, “Jewish philanthropy uses appeals to be generous that align well” with social-science research on how to effectively frame a request for help. He notes that Jewish appeals often connect “the needs of people who are poor to the Jewish history of enslavement in Egypt,” effectively forming an empathetic connection between the person giving money and the person receiving it.
Furthermore, “The literature on Jewish philanthropy emphasizes that giving to help people with basic needs is an essential part of Jewish identity,” he notes. “(It also) emphasizes a strong community norm behind giving.”
The apparent effectiveness of these appeals, alone or in combination, “might suggest ideas that can be transferred to other religious identities” looking for ways to encourage charitable giving, Ottani-Wilhelm concludes. Given the level of need in these tough economic times, such experimentation can’t come quickly enough.